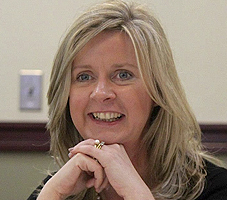 Since 2004 Lorraine McIlrath has coordinated the Community Knowledge Initiative (CKI) at the National University of Ireland Galway. There she is responsible for developing and supporting civic engagement activities across the university, with the CKI team, including service learning and student volunteering.

From 2007 to 2015, she established and was Principal Investigator (PI) of Campus Engage, a national Irish network to support civic engagement within higher education in Ireland. She is a founding member partner in a nine university EU Tempus Funded Project to support the introduction of service learning to five universities in Jordan and Lebanon entitled the Tawasol Project. Recently she has been elected to the Steering Committe of the Talloires Network and as part of this is leading on a national project to pilot the Carnegie Foundation Framework for Community Engagement in partnership with U Mass Boston, the Ireland Funds with support from the Higher Education Authority and Campus Engage. She has been developing and guiding the opening of a new communtiy cafe concept based at ILAS called Cafe Saol (Irish for Life) giving people marginalised from employment an opportunity to work.

She has consulted for the British Council in Russia - supporting the development of the College for Multicultural Education in Sochi on the Black Sea - and the Higher Education Consortium for Urban Affairs (HECUA) in the US - as Programme Director in Northern Ireland.