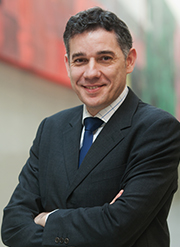 Ramón Salaverría, Phd (Burgos, 1970) is Associate Professor of Journalism at the University of Navarra. His research focuses on digital journalism, a topic in which he is a very referred expert.

During the academic year 2014-15, he was research scholar of the Digital Media Research Program at the University of Texas at Austin (USA). He has also served as visiting lecturer at the School of Social Sciences of University of Concepción (Chile), Instituto Universitario de Lisboa (Portugal), an the School of Philosophy of National Univesity of Asuncion (Paraguay). During the last decade, he has been invited to give lectures, seminars and keynotes in 30 countries.

From 2008 to 2014 he was Director of Journalism Projects Department at the University of Navarra. Before that he also chaired the Multimedia Communication Laboratory, from 1998 to 2008.

At international level, he was Chair of the Journalism Studies Section at the European Communication Research and Education Association (ECREA), during the term 2010-2012. Representing this association, he has served as member of the World Journalism Education Council.

He is a visiting professor for Master's Programs, both in Europe and Latin America, lecturing on new media trends. Mr. Salaverría has also led many in-house training programs for several media companies in different countries. During the last few years, he has offered keynote speeches, courses and seminars in 28 countries.

He was appointed by the United Nations (UN) to be member of Global Experts, a directory of 350 world-class specialists. The Spanish national daily newspaper El Mundo has included him several times in the list of 500 most influential Spaniards, more specifically among the top 25 of the Internet.