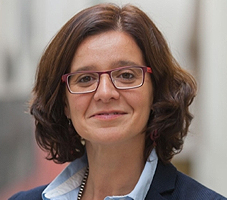 Her research focuses on television economics, media management, new television products and on the new relationships in the digital era. She has participated in numerous international scientific conferences as the World Media Economics Conference and EMMA, and she belongs to the Board of IMMAA (International Media Management Academic Association). She has various contributions in collective works published by reputable publishers such as Routledge or Lawrence Erlbaum. She has participated in several research projects with public funding, the last of them, about audiovisual consumption of European citizens in relation to new media.