During the last decade, we have been investigating the role that particle shape has on determining the emergent macroscopic properties of granular ensembles. Even though several kinds of shapes have been studied, we have primarily focused in the case of particles with flat faces. At the beginning we deal with static situations such as deposits of particles in a container where we discovered, for example, that square particles tend to align with a face at 45 degrees with respect to the gravity. As the particles became more and more elongated, the preferred orientation turned out to be horizontal, implying a strong alteration of the pressure transmission within the deposit.

Posteriorly, we start working with dynamic scenarios such as the flow patterns developed in the discharge of a silo. In this case, we evidence that shearing forces lead to strong particle alignment driven by the geometric frustration induced by the flat faces . Taking advantage of this marked feature, we have recently ideated a very effective way to pack cubic particles within a cylindrical geometry. 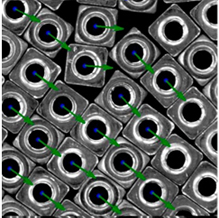