When a granular sample flows through a hopper, the spontaneous development of arches or domes causes flow intermittencies that eventually might lead to the complete arrest of the flow. Typically, resuming the flow is possible if an external perturbation (such as a vibration) is applied to the system.  In our team we investigate both, the problem of clogging development and the physics behind clogging destruction. We know that clog formation is a Poissonian process in which the probability of getting a blocking arch formed is constant over time. On the contrary, arch breaking is a history-dependent process in which the unclogging probability reduces with time giving rise to anomalous statistics in the distributions of breaking times. This dual behavior has been used to define a clogging phase diagram based in the lack of convergence of the breaking times distributions observed when the outlet size or the excitation intensity are small enough.

At present we are investigating the physical origin of the anomalous statistics in the distributions of breaking times.

Another interesting question that remains unsolved is whether, in a static silo, there is a critical outlet size above which clogging is not possible. Recent works on this subject seem to point towards the non-existence of such value, hence implying that even very large outlet sizes are susceptible to clog, being only a matter of waiting enough time. Despite this, there is not a conclusive physical explanation of this issue, so we are working on different directions in order to find it. One of them is trying to decouple the geometric and dynamic contributions to clogging. Also, we have been working on the role of different variables in clogging such as the width of the silo, or the surprising reduction of jamming when an obstacle is conveniently placed above the orifice.  More information can be found: 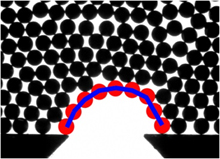