Adriana Gordejuela defended her doctoral thesis entitled, "Looking to the Past: A cognitive and multimodal analysis of cinematographic flashback" 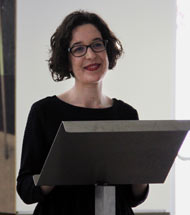 Adriana Gordejuela, a PhD student at the Institute for Culture and Society’s Public Discourse project, defended her doctoral thesis entitled, “Looking to the Past: A cognitive and multimodal analysis of cinematographic flashback” In it, the researcher tried to determine "the common denominator in cognitive terms of flashbacks that allows viewers to properly understand them."

For this, Adriana analyzed, on the one hand, the technical and poetic structures of flashbacks—such as levels, transitions, montage, music—and, on the other, the cognitive processes that each format triggers in viewers’ minds.

Representation of a temporal transition immediately activates "various cognitive processes, such as the compression of temporal relationships, the integration of points of view or identity connections between elements from different contexts," she notes. In this way, the newly minted doctor confirms that the study of cognitive mechanisms involved in the creation and understanding of multimodal discourses allows us to better understand how human beings communicate.

With an undergraduate degree in Hispanic Philology and Audiovisual Communication from the University of Navarra, Gordejuela later studied a Master's Degree in Contemporary Studies. During her undergraduate studies, she already began to take an interest in a research career. "From the beginning, I wanted to do something related to the 'language' of cinema and my director, Inés Olza who is principal investigator of the Public Discourse project, showed me a whole panorama of research that I did not know existed," she says.

In addition to Ines Olza, Francis F. Steen, professor in the Department of Communication at the University of California-Los Angeles (USA), co-directed the thesis. In fact, she studied with Steen for six months as part of a research stay, carried out thanks to a scholarship from the Caja Navarra Foundation.

While writing her thesis, she also attended international conferences and presented papers in Germany, Belgium and Estonia. 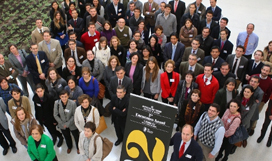