Rafael Yuste, a professor at Columbia University, gave the VI ICS Lecture, arguing for the inclusion of new clauses regarding these technologies and artificial intelligence in the Universal Declaration of Human Rights 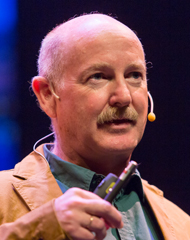 Including neuro-rights in the Universal Declaration of Human Rights helps ensure "that new neuro-technologies and artificial intelligence are used for the benefit of humanity," according to Rafael Yuste, a professor at Columbia University (USA) and an initiator of the BRAIN Initiative, during his lecture the University of Navarra.

The expert gave the VI ICS Lecture on Humanities and Social Sciences, entitled, “New neuro-technologies and their impact on science, medicine and society.” The Institute for Culture and Society (ICS) of the University of Navarra organized the lecture within the framework of the research carried out by ICS’s Mind-Brain Group.

"New international projects are using methods to read brain activity and modify it," he explained. "The brain-computer interfaces used are becoming less and less invasive," he added, "which means that they will be used on more and more people."

The expert pointed out that this technological revolution "is going to change the rules of the game" and that, although on the one hand "it will usher in a new Renaissance, it [also] has many social and ethical implications," he emphasized.

Yuste represents a group of international and interdisciplinary researchers and experts that is trying to add new clauses to the Universal Declaration of Human Rights in relation to these advances in order to "protect citizenry from possible abuses that may arise from both neuro-technologies and artificial intelligence,"he detailed.

Specifically, the project’s value system is erected around four pillars: mental privacy, which prevents the use of mental activity data for commercial purposes; personal identity, meaning thatincreased cognitive abilities does not alter people's decision-making capacity; equitable access to technologies to avoid inequalities and privileges; and protection against biases and discrimination against minorities.

In his lecture, Rafael Yuste spoke about research’s changing perspective toward understanding the mechanisms of the brain. He commented that research teams have gone from focusing on individual neuron activity, like the work of Santiago Ramón y Cajal or Charles Schott Sherrington, to studying the joint activity of a large number of them. He likened it to a television screen, i.e., to understand an image you cannot look at a particular pixel, but rather have to focus on the overall set of pixels.

This hypothesis is based on the idea that, in multi-unit systems, there are emergent properties that are not present in each individual unit. This is what happens, for example, in the atoms of a magnet; the individual atoms are not magnetic, but the interactions between them generate this property.

Mapping the brain of small animals

Along these lines, Professor Yuste explained that more than 500 laboratories in the United States and in other countries are currently working on the BRAIN Initiative, which launched in 2013 with the aim of driving neuroscience towards understanding the brain’semergent properties. He pointed out that this interdisciplinary initiative seeks to develop techniques that can record the complete activity of the simplest brains onthe evolutionary spectrum, including worms, flies, fish and mice. "In five years we hope to decipher the activity of 50,000 neurons, in 10, one million neurons, and in 15, the complete brain activity of these animals,"he said.

To record neuron activity, researchers use calcium-sensitive substances, which identify when a neuron fires. "Based on these calcium concentrates, we can see how neurons interact with each other," he said. So far, they have managed to map the complete activity of a cnidaria, hydra vulgaris. "The bad news," he noted, "is that we do not understand the relationship between this firing of neurons and behavior. Most of the activity is spontaneous."

In the case of mice, he divulged that they have managed to observe the activity of a small group of neurons, about 2,000, with the two-photon microscope. "The neurons fire in groups, like small earthquakes. This is an emergent property we could not have observed with electrodes,"he added. He acknowledged that completely mapping the brains of these rodents could still take over a decade.

All these advances are laying the foundation, in his opinion, for a general theory that explains how the human brain works. According to Professor Yuste, such a discovery would be as revolutionary as that of the DNA’s double helix.

Rafael Yuste spoke on this topicat the sixth edition of the ICS Humanities and Social Sciences Lecture, which corresponds to a series of conferences that the University of Navarra’s humanities and social sciences research center organizes on an annual basis. Given by internationally recognized researchers, this series aims to present some of the different topics that ICS projects are working onto the University community and beyond.