This according to Poul Holm, president of the European Consortium for Humanities Institutes and Centres (ECHIC) at the Institution's annual conference hosted by the ICS 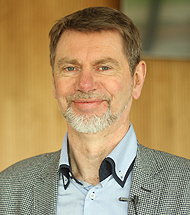 "The humanities have much to offer society with regard to the great challenges of the twenty-first century since issues such as climate change, immigration, the financial crisis... have to do with how human beings perceive things and act." Or so Poul Holm claimed, president of the European Consortium for Humanities Institutes and Centres (ECHIC), at the Institution's annual meeting hosted by the Institute for Culture and Society (ICS) of the University of Navarra on March 26-27, 2015.

According to Professor Holm, addressing these challenges requires "a better understanding of individuals' motivations and their ability to change," which is closely related to the humanities. As he further noted, "In the current crisis, our values ​​and understanding of the world are involved. To understand it better, we must delve deeper into disciplines such as literature, history, philosophy and language."

Thus, he stressed the need to make it clear to politicians and managers that "rather than solve problems, merely technical solutions make them worse. We need research projects that are led by both engineers and humanists, people who understand values. "

With regard to the current state of research in the humanities in Europe, Poul Holm was optimistic; he stressed that new methodologies have emerged that "confront old problems in new ways." However, he noted that big issues like climate change or post secularism have become so large that "the humanities must also make the leap to address them."

Thus, he stressed the importance of collaboration between centers and institutes "to learn from one other, identify best practices in different countries and improve collaboration both in Europe and around the world."

With regard to the challenges that these institutes face, he emphasized their role in identifying high-level researchers at universities, facilitating meetings between senior and junior researchers and identifying funding opportunities. "We need people that can help researchers submit competitive proposals," he added.

Some thirty experts from centers in the UK, the Netherlands, Portugal, Italy, Poland, Denmark, Ireland and Spain took part in the ECHIC's V Annual Meeting. Among other issues, they addressed things such as Horizon 2020, civic humanities, public and private funding and the value of the humanities to society.