"Academic knowledge must penetrate social life which in turn, should stimulate scientific development." 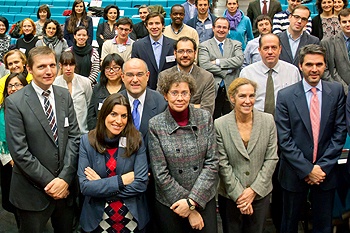 One hundred researchers participated in the third Annual Meeting of the Institute for Culture and Society at the University of Navarra. FOTO: Manuel Castells

"Social innovation research involves generating a circle of positive feedback between academia and society: the objective knowledge obtained in the libraries should not remain within the academic field but rather penetrate social life, becoming a stimulus to scientific development". This statement was made by Ana Marta González, scientific coordinator of the Institute for Culture and Society (ICS) during the third Annual Meeting of the research center in the humanities and social sciences at the University of Navarra, held under the title, "Innovation and social integration".

Professor González referred to the new European research strategy, Horizon 2020: ‘A characteristic feature of the framework program is the express wish to not separate research from social innovation. The main focus is to generate a smoother transition between academia and society, thereby promoting reciprocal enrichment'.

She stressed that the first social impact is that which, starting from the interdisciplinary research of problems, leads to the introduction of improvements in family, in society, etc., which affect the configuration of lifestyles and professional practice in a positive way. Proposals should aim at promoting forms of social solidarity, where different world views do not inevitably result in conflicts.

For this professor of Moral Philosophy, this discourse is not new in the ICS:  "From the very beginning, the approach taken in our scientific work has been to attempt to resolve social problems and construct human societies".

During the opening of the Third Annual Meeting, the Vice President of Research at the University, Iciar Astiasarán, said that ‘in the calls for agencies supporting science there is a very clear message which has intensified:  research obtains financial support when it has been able to produce things that are beneficial to all of society'.

The dream of this University is that ICS become its flagship for changing the world, for showing the world that there are values worth fighting for. But when one deals with issues that are likely to be approached from different points of view, you cannot get bogged down in the opinions. According to Iciar, "There is only one way to reach this objective: supporting the view backed up by a series of conclusions that have been obtained by applying methodology and scientific precision ".