The ICS doctoral candidate, Ernest Thera, a Mali native, defended his thesis in which he compared the asylum, entry, residence, permanence and integration for migrants in France and Spain 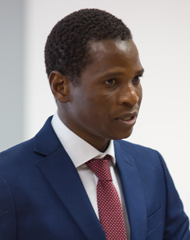 Ernest Thera, a native of Mali, defended his thesis, which he wrote under the direction of Professor Caridad Velarde. He conducted his research within the Institute for Culture and Society (ICS) of the University of Navarra and defended his thesis within the School of Law. It focused on asylum, entrance (regular and irregular), residence, permanence and the integration of immigrants in France and Spain.

The newly minted doctor explained that his work "incites countries to take seriously human rights when it comes to migration movements and legislate for common management at the UN level since migrations are a global phenomenon in a global world and exceed the capacity of state sovereignty."

He explains that his thesis ultimately "seeks to promote respect for immigrants’ rights and their integration into host societies, which fosters social cohesion in these increasingly pluri-cultural societies."

This comparison of international, constitutional and infra-constitutional legal regulations in France and Spain regarding iusmigrandi (migration law) revolves around two focal points. The first is the right of asylum, entry, residence and permanence, issues "regarding which these two countries have much in common," comments Thera.

On the other hand, he indicates that asylum has been Europeanized through the Dublin Convention that allows Member States to deal with demands jointly, with common management of massive asylum flows, and with refugees’ some times protracted situation. "But the 2015 and 2016 refugee crisis demonstrated just how weak states are in terms of their ability to cope with flows. They did not know how to distribute responsibilities efficiently and equitably " he stressed.

Asylum is also recognized—as he pointed out—in Spain and France’s constitutional law and both countries have mechanisms for claimants to appeal a negative asylum decision (the right to an effective remedy).

"I have also concluded,” he underlined, “that unaccompanied minors receive the greatest protection both in the case of refugees and migrants." He believes that the greatest difficulty in this case is the determination of what constitutes a minor in terms of age: "I foresee the possibility of carrying out complementary testing in Spain and France; in Spain,the decision cannot be appealed, which represents a risk of violating the child's right to be admitted."

With regard to residency, Ernest Thera argues that, "except for the right to vote and to be elected to political positions, immigrants in a regular situation are likely to be entitled to the same rights as other citizens."

Immigrants in an irregular situation, however, are—according to Thera—the least protected collective in host countries. "But as human beings, they hold human rights and the host countries must treat them as such," he says.

The thesis’s second axis corresponds to the integration of foreigners. Thera found that, in this respect, greater distinction between the two countries exists: "France has developed an assimilation ist system that only accepts the values ​​of the republic in the public sphere and reserves the expression of religious and cultural matters to the private sphere."

In his opinion, we cannot speak of a system of integration in this nation, but "there is a tendency towards intercultural integration that reflects the basic principles of citizenship and integration."

Ernest Thera asserts that Europe is fostering intercultural integration "because it is perceived as an alternative to systems of assimilation and multiculturalism, which, as we have seen, have failed. Intercultural integration is therefore encouraged at all levels of State decision-making." However, he warns that poor application "can produce the same conflicts that the assimilation ist system produces."