"At the University of Navarra, we want to develop knowledge that can be useful for people"

The Rector of the University participated in the launch of the Institute for Culture and Society in Madrid, which was attended by about 300 people 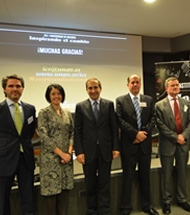 "At the University of Navarra, we want to be on the cutting edge of science, and go a step further to develop knowledge that can be useful for people."  Thus spoke the Rector, Alfonso Sánchez-Tabernero, at the launch of the Institute for Culture and Society (ICS), which took place on October 30th in Madrid. The event was attended by 300 people, including numerous friends of the University and alumni.

The university "aims to be inclusive and balanced, and to advance in all fields relevant to society." Thus, following the progress made in the areas of biomedical, technological and business research over the last few years, the ICS seeks to complete the scope of research by investment in the field of the humanities, Sánchez-Tabernero.stressed.

"The aim of this Institute is to analyse the main problems that affect contemporary man, from a Christian perspective. We do so through conducting high quality research that makes waves in international publications with the highest standards."

Sánchez-Tabernero stated that the development the university has experienced throughout its six decades is due to three things: commitment, team spirit and the motivation of the professionals it counts on; the magnanimity, hope and optimism provided from the beginning by its founder St. Josemaria; and the generosity of the Friends of the university, who make the development of projects such as the ICS possible.

For his part, Jaime García del Barrio, ICS director, highlighted the efforts made by the Spanish research center to retain Spanish talent whilst attracting foreign expertise. "We have researchers signed up from the leading universities of the world. This requires that we maintain very high quality standards. In order to achieve this, we carry out very demanding assessments annually." 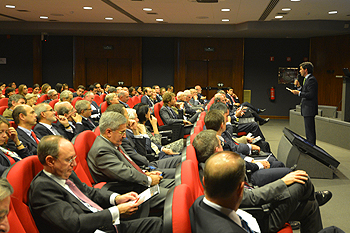 A forum led by the journalist Fran García Cabello, president of the Alumni's regional committee in Madrid was also held during the launch. Professor of Economics Luis Ravina, director of the Navarra Center for International Development(NCID), Professor  Montserrat Herrero, main researcher on the project ‘Religion and Civil Society', and Professor of Medicine Jokin de Irala, main researcher on the ‘Education of human affectivity and sexuality' project, participated in the roundtable.

Prof. Ravina pointed out that extreme poverty affects millions of people. "The problem is not a shortage of resources. It is possible to bring about redistribution that would improve the situation in the world," he stressed. With regard to the investigation carried out by the NCID team, the center is currently studying how phenomena such as migration or transmission of knowledge contribute to the development of peoples.

Prof. de Irala explained that the purpose of his project is to "contribute to improving education about the beauty of human sexuality", and that to this end they are developing educational materials adapted to different school years. " Authentic sexual education is education geared towards love," he said.

The 'Religion and Civil Society' project, as Prof. Monserrat Herrero explained, seeks to reinterpret the secularization thesis.  "Religion is not something of the past or contrary to progress. Contrary to popular belief, atheism is not only not extending in Europe, but in some countries religious practice has even increased."