Fernando Ocáriz, Grand Chancellor: “The University was born thus rooted in this land and here he will always have his home”

The Grand Chancellor, Fernando Ocáriz, presided over the event held at the Theater Museum of the academic center, which was attended by about 700 people. Among them, more than 200 doctors, other University professionals as well as academic and political authorities.

Since 1964, the academic center has granted this distinction, for its academic and professional career, to 39 personalities. The current proposals come from the School of Architecture, the Institute of Culture and Society, and the faculties of Philosophy and Letters, and Communication.

In his speech, the Grand Chancellor referred to universities as places of “hope and freedom”. “Paradoxically, in the midst of progress and well-being never achieved so far, we see the energy that drives people and societies depleted”, he said. That energy, he added, can arise from a genuine education, “from the transformative power of people who think for themselves”.

In this regard, he said that “the university must be a beacon that, through the investigation of truth, illuminates the world; a sap that, through coexistence and friendship, nourishes the souls of young people who pass through this campus year after year. Herein lies a source of vitality, capable of returning enthusiasm to a tired world”.

The Grand Chancellor referred to St. Josemaría, who decided that the University should begin in Pamplona. “He was born thus rooted in this land and here he will always have his home”, he said. “In recent years”, he continued, “the efforts to obtain scholarships and financing opportunities, as well as the notable increase in international students, are gradually making the Founder's wishes come true: that no one who wishes to stop studying here and that the service provided by the University reaches people from the five continents”.

Second, he spoke of the University as a source of freedom. “In it you have to learn to respect, love and understand others. Only in a free environment is a genuine education possible”. Mons. Fernando Ocáriz said that “young people come to the classroom when they have to make decisions that will mark the rest of their lives”. Counting on his freedom, he remarked, they are invited to “promote the fairest causes, to worry about the neediest, they are prepared to understand their profession as a service to society”.

Navarre architect of the universal dimension

Rafael Moneo, born in Tudela (Navarra) in 1937, is considered the Spanish architect with the greatest international projection. In 1996 he was the first Spanish to receive the Pritzker Architecture Prize. He has also been awarded, among others, with the Prince of Asturias Award for the Arts, the National Architecture Award and the Prince of Viana Award in 1993.

The director of the School of Architecture, Miguel Ángel Alonso del Val, godfather of Rafael Moneo, referred to him as a “universal Navarro”. Awarded with national and international awards, “proves to be a prophet in the world and on his land, identified with the Tudela of his first works and recognized in the Pamplona of the bullring, the Plaza de los Fueros or the General Archive”, he said.

In his opinion, it represents the figure of the architect who has managed to masterfully combine his work as an academic, theoretician and builder until he became “the highest reference in current Spanish architecture”. He also mentioned the close relationship between Navarra and the University with Moneo, “a university student who has made architecture his way of seeing the world and his work, an example of dignity and decorum”.

Already invested as an honorary doctor, Rafael Moneo highlighted in his speech the contribution of the University of Navarra to the modernization of Pamplona. “I appreciate, as Navarro, the valuable contribution of the University of Navarra to the urban development of Pamplona”, he said. “You have to understand the University campus, in continuity with the UPNA, as a public space, a park that tops the southern growth of the city, recognizing the importance that this river has in the urban structure of Pamplona”, he explained.

He also highlighted the impact that the School of Architecture has had on the city: “If Pamplona can take pride in being one of the cities that have grown more harmoniously in recent years, it is undoubtedly the good work of the professionals trained in this School. In no other Spanish city, the presence of a School of Architecture is felt as favorably as here”.

Rafael Moneo insisted on the role of the University of Navarra in the transformation of the city, with the arrival of students and professors, and the access of Navarra to “a whole range of professions”. “Pamplona has been transformed by the presence of the University, of the universities, and thanks to them it is today a much more lively, cheerful, open, confident, prosperous city”, he added. 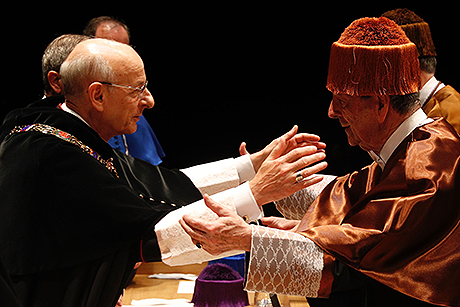 Margaret S. Archer (United Kingdom, 1943) is a professor of Sociology at the University of Warwick, and a founding member and president of the Pontifical Academy of Social Sciences between April 2014 and March 2019. She was also the first woman to preside over the International Association of Sociology. A qualified representative of the Realistic Social Theory, its central thesis is the autonomy between culture, structure and social action.

Ana Marta González, scientific coordinator of the Institute of Culture and Society (ICS) and godmother of Margaret S. Archer, praised the pioneering nature of the new doctor and the scope of her intellectual work in the field of social theory. “In his personality a deep humanity meets the rigorous cultivation of science, which are present in the affability of his conversation and in the seriousness of his ethical commitment to the development of more human societies”, he said. He also noted that his work is “a clear example of how the springs of social change are activated in the silent fertility of reflection”.

Margaret S. Archer began her speech by asking why social sciences have contributed so little to responding to the challenges of today's society. “From my point of view, the most serious problem, which is rarely mentioned, is that the connection between social sciences and philosophy is distressingly tenuous”. In her opinion, “for any theory to be considered explanatory of social change, it must necessarily incorporate structured human relations (Structure), human actions (Culture) and human ideas (Agency)”. 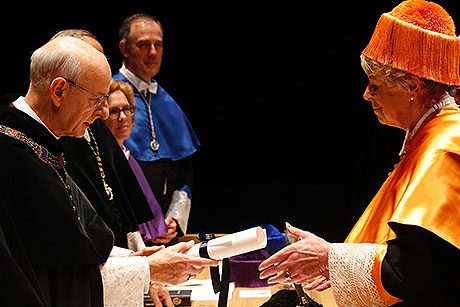 Ruth Viviana Fine, born in Argentina (1957) and of Israeli nationality, is a professor at the Hebrew University of Jerusalem. Specialized in literary theory and narrative of the Spanish Golden Age, especially in Cervantes', her work has focused on the intercultural dialogue between Israel and the Hispanic world. She is a founder of the Association of Hispanists of Israel; Vice President of the International Association of Hispanists; and member of the International Golden Age Association.

Hispanoamerican Literature Professor Javier de Navascués, godfather of the philologist, highlighted its rigor and elegance in the description and interpretation of texts. “The watchtower of her multicultural heritage, which links three continents through Jewish, Spanish and Argentine culture, Professor Fine has clarified the works of the best narrators of literature in the Spanish language”, he said. The professor defined her as “a woman who has given herself to the study and interpretation of Spanish-language literature, building bridges of intercultural dialogue between the Hispanic and Hebrew world”.

Professor Fine toured her vital and academic career, until her decision to turn to the research of the Golden Age. “The primary interest that guides even all my intellectual activity is to investigate and deepen that great polyphony that is history and Spanish culture, whose various melodies - Christian, Muslim and Jewish - constitute multiple stories, which ask to be remembered, told, interpreted, rewritten”.

Ruth Fine acknowledged that the Bible and Don Quixote have been decisive in her career: “My research has been interested in the work of numerous men of atrial letters who resorted to the biblical paradigm at various levels of their creative project”. 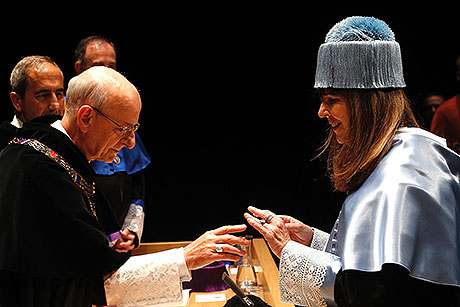 Reference in the economy of the media

Robert G. Picard was born in 1951 in the USA, he is a professor at Jönköping International Business School, in Sweden, at Tampere University, in Finland, and at the Institute for Media and Entertainment of the IESE (University of Navarra) in New York, between others. Until January 2015, he was Research Director of the Reuters Institute for the Study of Journalism, at the University of Oxford, and one of the founders of the European Media Management Association (EMMA), the first European academic association of researchers on this subject.

Mercedes Medina, her godmother and professor at the School of Communication, underlined his intense research, magnanimity and solidarity: “His prestige along with a warm and close personality predisposes him to serve and help others. One of the qualities that stand out of Professor Picard is his ability to connect people”. The teacher continued her laudatio explaining that “the vision of the informative company of Professor Picard is closely related to the role of the media in society: economic performance allows a complete service”.

Robert Picard commented that the help he has received in his personal journey and his values ​​make him believe that as teachers and colleagues there is a duty to “contribute to the cultivation and development of the talents of our students and younger classmates”. Similarly, he said that “communication is essential to build healthy societies. That is why we must find a way to address their current deficits and facilitate communication structures and institutions that serve our collective needs”. 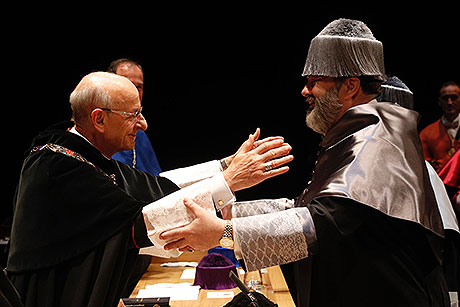