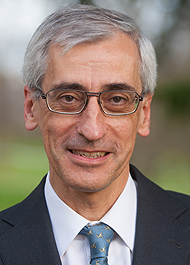 As an expert in the history of journalism education in Europe and the United States, I wrote a number of book chapters and articles in international journals on this topic, and also the history of my own school: Historia de la Facultad de Comunicación de la Universidad de Navarra. Medio siglo de enseñanza e investigación, 1958-2008 (Eunsa, Pamplona, 2009).

I have been the supervisor of several doctoral dissertations, and also head of research projects in my field. Author of more than one hundred book chapters and articles in journals, I serve as a member of the editorial board of journals like Javnost-The Public, Journalism and Mass Communication Educator, and Newspaper Research Journal, and also of the book series "History of the Media" edited by Palgrave MacMillan. I have acted as reviewer for a number of prominent international journals like Journalism & Mass Communication Quarterly, Television & New Media. Journalism Practice, and Media History, and also for other communication and history journals published in Spain. I participate regularly as a reviewer of research projects for ANEP, the Spanish Agency of Evaluation and Prospective.

For eight years (1996-2004) I served as a member of the board of the Asociación de Historiadores de la Comunicación,. Later, I was elected Vice-Chair (2004-2008) and Chair (2008-2012) of the History Section of IAMCR (International Association for Media and Communication Research), the oldest worldwide association of communication researchers. Between 2014 and 2016, I also served as vice-chair of the temporary working group "Journalism and Communication Education" of ECREA.

As a long-distance runner, which has allowed me to survive in the middle of so many academic and managerial activities, I have run seventeen marathons (with a personal record of 3:04:25 in September 2007 in Saragossa), and lots of half-marathons (personal record of 1:23:51 in May 2004 in Pamplona). I felt extremely happy after running the New York marathon in 2010, taking advantage of my research stay in New Jersey. I have also been the captain of Nipho, the indoor soccer team formed by professors of the School of Communication, since its inception in 1993 until 2014.