“Vaccination is an act of solidarity: if the population is not protected, the virus will find a way in to infect”

Pablo Sarobe, a researcher with CIMA Center for Applied Medical Research at the University of Navarra, is optimistic about the results from Pfizer, Moderna and Janssen: “They have passed the same safety and efficacy requirements as other vaccines” 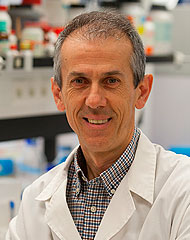 Pablo Sarobe, a researcher with CIMA Center for Applied Medical Research at the University of Navarra , is optimistic about the results from Pfizer, Moderna and Janssen: “They have passed the same safety and efficacy requirements as other vaccines”.

“These are innovative vaccines, developed using similar technology. From the published data, soon to be confirmed in scientific journals, they generate good immune activity,” he says. Sarobe participated in a conference about “COVID-19 vaccines: present and future”, one of the activities held as part of the Science Week organized by the Science Museum at the University of Navarra.

In response to the reluctance among some people to be vaccinated, he argues that “vaccination is an act of solidarity; ideally, there should be an awareness of the need and benefit it would bring to society”. Compared with traditional drugs, where only the person affected is treated, “the benefit of vaccination is global,” he says. “In fact, there are people who would like to be vaccinated, but because of factors such as age or other comorbidities, vaccination is not so effective, and the best way to protect them is to protect society as a whole.”

Sarobe is a researcher with the Immunology and Immunotherapy program at CIMA. “Last spring, everyone was very proud of the solidarity that meant people stayed at home for the good of all.  Well, vaccination means the same thing from now on”.

In relation to the claim by Ugur Sahin, one of the developers of the Pfizer vaccine, that it might be possible to resume a normal life in mid-2021, Sarobe agrees that if the vaccine efficacy and vaccination rate are high enough to ensure herd immunity, we should be protected. “However, if a section of the population is not protected by the vaccine, there will always be a niche where the virus can infect and spread”.

Similar side effects to other vaccines

When asked if he would be vaccinated, Sarobe replies without hesitation: “I have no reason to put off receiving a vaccine that has passed the various test phases and generated the efficacy data which are being published.” In his opinion, public distrust could be due to a lack of information about the drug approval process: “Even though it has been produced in a short time, the vaccine has met the same safety and efficacy criteria as any other and has been approved by the relevant scientific committees”.

This approval means that the safety levels and side effects generated in the thousands of people who have participated in clinical trials are within acceptable standards, he explains. So far, the side effects reported in the Pfizer, Moderna and Janssen trials are consistent with what is commonly seen in other vaccines. “These are effects such as redness and swelling at the injection site, mild fever, etc., which in most cases are very short-lived.”

He also points out that these vaccines may be the first, but they will not be the only ones, since others have also shown promising results: “From an effectiveness point of view, they don’t have to be the best, and there are also practical issues, such as product stability and storage and distribution requirements, that could make some vaccines more effective than others,” he says.

In fact, at the University of Navarra, Pablo Sarobe's team is researching one of them. “Our vaccine is based on the administration of fragments from very specific areas of the virus, which requires the identification of those areas and their immunization properties. This makes the process slower than vaccines based on viruses or whole proteins.” So far, they have identified some of these areas and are characterizing the effect of the vaccine in animals. “To this end, the idea is to design a vaccine with the best efficacy and safety properties,” he concludes.