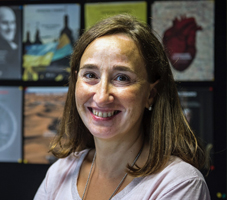 MASTERCLASS
Millennials and generation Z: Do we know our students well?

Charo Sádaba is a professor of Advertising at the University of Navarra’s School of Communication and has been the Dean of the School since June 2017. Since her dissertation defence in 1999, her research has focused on two main areas: the impact of the Internet on business models in the media, and the special relationship between young people and technology. In the first case, she has been a member since 2001 and served as vice-chair of the European network COST A20, made up of collaborating researchers from 24 countries.

She has participated in several competitive projects on technological and cybermedia convergence, and was the PI of the project on innovation and cybermedia in Spain. She currently supervises one of the doctoral dissertations within the framework of the JOLT-Marie Curie Project at the Center for Internet Studies and Digital Life. Sádaba’s interest in children, teens and technology began with two reports she prepared for the Institute of Sport and Youth of Navarre (2001 and 2003), and continued with the implementation of the Interactive Generations project (2007-2012), funded by Telefónica, of which she was the Director of Research.

As an independent expert in the European Safer Internet project (now part of DG Connect), she has participated as a national expert in the POSCON Thematic Network (Positive Online Content and Services for Children in Europe), and as a member of the Advisory Board of the Net Children Go Mobile project and eSafety Label. In 2018, she was listed among the 100 most influential women in Spain for her knowledge in this field. She has written many reports, articles, books and book chapters on these topics.