The end of World War II in 1945 finally allowed Opus Dei to expand internationally, although some of the younger members of Opus Dei had actually already started the Work to some extent in Portugal and Italy. This expansion meant going from a diocesan approval to a pontifical approval. Thus, Saint Josemaría moved to Rome in 1946, where he would live for the rest of his life. In 1947 and 1950, Pious XII issued the necessary canonical approvals. This greatly facilitated the universal expansion of Opus Dei. In addition, it allowed married people to join Opus Dei and diocesan priests to join the Priestly Society of the Holy Cross while respecting their obedience to the bishop of their diocese. In 1982, following the legal pathway Josemaría had envisioned, Opus Dei was established as a Personal Prelature by Pope John Paul II, (even though Josemaía had already passed away). The institution found a la legal framework  that fit its spiritual and apostolic essence. 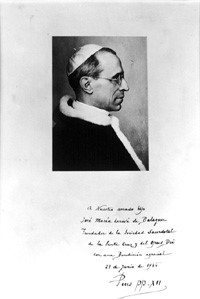 global expansion of Opus Dei. He wanted every member of Opus Dei, men or women, to receive a well-rounded doctrinal, ascetic and apostolic formation, allowing them to sanctify their professional lives and spread the Christian message from within the many different social environments in which they could play their part. Opus Dei spread to other countries very quickly. In 1946 it reached Great Britain, Ireland and France, and most of Western European countries in the years that followed. In 1948, the Work began in Mexico and the United States and, a short time later, most countries in the Americas. Towards the end of the 1950s and the beginning of the 1960s, Opus Dei formed a stable presence in Asia, Oceania and Africa: Japan, Kenya an the Philippines. By the death of its founder, Opus Dei had more than 60,000 members from 80 countries and a wide variety of social and professional situations. Thousands of people had grown in their Catholic faith and matured in the Christian way of life, creating numerous charitable, healthcare and educational apostolic institutions, one of which is the University of Navarra (Spain), of which Saint Josemaría was the first Chancellor.