The Spanish Civil War and Burgos

In 1935, although there were still very few members in Opus Dei –hardly a dozen–, Saint Josemaría was thinking about its expansion from Madrid to 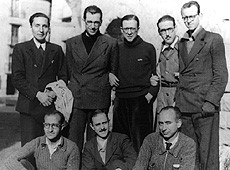 other cities. Howewer the start of the Spanish Civil War prevented this development. During  the war years, Josemaría carried out his priestly duties first in Madrid – in grave danger- and later in Burgos, after crossing the Pyrenees through Cataluña in 1937. Once there, he maded contact with the other members of Opus Dei, furthered his pastoral work with women who showed signs of a vocation to the Work, and carried out other priestly duties. In addition, with more time available, he decided to pick up his doctoral thesis where he had left it off. Assuming that the research he had done was lost in Madrid, he chose a new topic of the quasi-episcopal jurisdiction of the Abbess of the Monastery of Huelgas, in Burgos. He presented and defended his thesis towards the end of 1939. Five years later, after finishing and adding to his research, he published an extensive monograph entitled "The Abbess of Huelgas," making this his third publication.