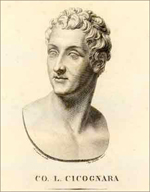 Leopoldo Cicognara (1767-1834), was born to a noble family in Ferrara, Italy. He was an Italian poet and an amateur artist, a patron of the arts, and one of the founding fathers of the discipline of Art History. He held various political and diplomatic posts and was also president of the Fine Arts Academy of Venice from 1808 to 1827. He possessed a magnificent library of over 5,000 works on painting, sculpture and architecture, as well as the relationship of these arts with literature, music, philosophy and other branches of knowledge. The Cicognara Library also contains biographies of artists and poets, treatises and manuals on various arts, studies of emblems, funeral rites, numismatics, Roman and Greek antiquities, and architectural dictionaries. It was acquired by the Vatican Library in 1824, under the pontificate of Leo XII, creating the Cicognara Collection. Cicognara had published a catalogue of his library in 1821 (ragionato Catalogo dei libri d'arte e d'Antichità posseduti Cicognara Conte dal), which has become an irreplaceable guide to art history sources from antiquity to the early nineteenth century.

In 1989, the Library of the University of Illinois, in cooperation with the Vatican Library, started a project of microfilming the library Cicognara, which is not yet completed.

You can find more information on the Library Cicognara in: Cicognara Library.

In 1998 the Library of the University of Navarra acquired the microfilm version of the Cicognara Library, which is in its Multimedia Room (shelfmark MF.mZ000.031). In 2008, by courtesy of the National Gallery of Art Library, all the bibliographic records of the collection were incorporated into the library catalogue.

After locating an item in the catalogue, you can request to play it on the equipment installed in the Multimedia Room. In each record, after the shelfmark, the item number is included on the microfiche.

Entering ‘Cicognara Library' in the title field will produce the complete list of items, arranged alphabetically by title.