President. About the University. University of Navarra 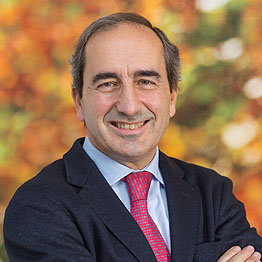 "We desire to be an academic institution with an international atmosphere; one that imparts a high quality education, grounded in the major principles of Christian thought: the desire to discover truth, respect for all, openness to the transcendent destiny of man, solidarity, and help for those most in need"

He is PDG for the IESE at the University of Navarra and a Visiting Fellow of the European Institute for the Media (Dusserldorf, Germany). He has also been a visiting professor at the University of Manchester (1990-1992) and at Northwestern University in Chicago (1996). He collaborated with the Institute for Media and Entertainment, a center supported by IESE and the School of Communications in New York. He was also the president of the European Media management education association (1998-2004).

He continues to teach classes in the School of Communications and advise students.