Chancellery. Organization. About the University. University of Navarra

The Chancellor of the University is the Prelate of Opus Dei, Fernando Ocáriz.

In accordance with the Statutes of the University, and among other powers, he appoints the President and confirms the appointment of the main academic authorities. In his responsibility as chancellor he is assisted by Opus Dei executives who make up the Chancellery.  In particular, the Vice Chancellor who is the regional vicar of Opus Dei in Spain, who is currently Ignacio Barrera. 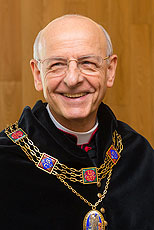 The University of Navarra must be a beacon that, through our research into the truth, illuminates the world; a sap that, through our friendship and shared lives, nourishes the souls of young people who study on our campuses year after year. That is the source of our vitality, capable of enthusiastically renewing to a weary world.

He is a consultor for the Congregation for the Doctrine of the Faith (since 1986), as well as other departments of the Roman Curia: the Congregation for the Clergy (since 2003) and the Pontifical Council for Promoting the New Evangelization (since 2011). He has been a member of the Pontifical Theological Academy since 1989. In the 1980s, he was among the professors who began the Pontifical University of the Holy Cross in Rome, where he was a tenured professor (now emeritus) in Fundamental Theology.

Since 1994 he has been the Vicar General of Opus Dei, and in 2014 he was named Auxiliary Vicar of the Prelature. Over the past 22 years he has accompanied the previous Prelate, Bishop Javier Echevarría, on his pastoral trips to more than 70 countries. In the 1960s, as a theology student, he lived in Rome alongside Saint Josemaría, the Founder of Opus Dei.

SPEECHES IN THE UNIVERSITY