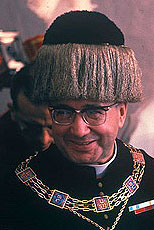 Josemaría Escrivá de Balaguer was born in Barbastro (Huesca, Spain) on January 9, 1902. His parents were José and Dolores. He had five siblings: Carmen (1899-1957), Santiago (1919-1994) and three younger sisters who died when they were children. The Escrivás provided their children with a profound Christian education.

On October 2, 1928, during a spiritual retreat in Madrid, St. Josemaría saw what God was asking of him, and founded Opus Dei. From that day on he worked on the foundation while he continued to fulfill his priestly responsibilities, especially among the poor and sick. He also undertook university studies in Madrid and taught classes to support his family.

In 1946, he moved to Rome. He obtained a Doctoral Degree in Theology from the Lateran University. He was named a consultant to two Vatican Congregations, an honorary member of the Pontifical Academy of Theology, and prelate of honor to His Holiness. From Rome, he made many trips to different countries in Europe, as well as to Mexico in 1970, to spur on the establishment and consolidation of Opus Dei in those places.

SPEECHES IN THE UNIVERSITY

First visit to the University

During St. Josemaría's first visit to Pamplona (1960), the Estudio General de Navarra (EGN) was elevated to the status of the University of Navarra. Furthermore, St. Josemaría received the distinction of the Freedom of the City of Pamplona, celebrated Holy Mass at the Cathedral and blessed a chalice at the Aralar University Hall of Residence.

As Chancellor of the University, St. Josemaría participated during his visit in the granting of honorary doctoral degrees to Juan Cabrera y Felipe and Miguel Sancho Izquierdo. He was received at the Pamplona municipal government building and held many meetings in the auditorium of the Belagua University Hall of Residence. He also attended the 1st Assembly of the Friends of the University of Navarra.

The Shrine on campus

In April 1967, St. Josemaría, during a new visit to Pamplona, received the Governing Board of the University and visited and kissed the image of Our Lady of Fair Love on the University of Navarra campus.

In October 1997, St. Josemaría presided over the granting of honorary doctoral degrees. Furthermore, the founder of Opus Dei celebrated Holy Mass on the esplanade in front of the Library Building at the University, where he gave the famous homily "Amar al mundo apasionadamente"

St. Josemaría met with the boards of management of Theology and Canon Law, as well as newspaper editors in Pamplona.

Last visit to the University

St. Josemaría visited the University for the last time in 1974. After presiding over the ceremony granting honorary doctoral degrees, the founder of Opus Dei participated in a gathering at the Belagua University Hall of Residence with professors and University employees.