The Parlamento Cívico project welcomed Prof. Inger Enkvist last Friday (22nd Nov.) to speak on the subject of ‘The secret of Afro-American students' success in the US'. Enkvist is currently Professor at the University of Lund, and an advisor to the Ministry of Education of Sweden. Enkvist's principal conclusion was a call to recognize the importance of the role of personal willpower and attitude in education. Prof. Enkvist introduced her lecture by explaining the necessity of talking about the subject: "In educational studies we often hear about why the education of Afro-American students in the United States goes badly, but rarely about the times it goes well."

With the 1960s and 70s' war against poverty and fight for equality, affirmative action – positive discrimination and social aid – for Afro-Americans was employed in order to increase access to educational institutions. This generated, according to Prof. Enkvist, a certain ‘victimism' among the groups affected; fostering the idea that ‘society owes us something'. This was accompanied by anti-intellectualism and separatism born through a new kind of marginalization that made it necessary to stick together, motives which were counter to the aims of affirmative action. Prof. Enkvist outlined the consequences for education of these attitudes.

It has been argued that Afro-Americans are bound to achieve poorer results in education due to their generally lower socioeconomic status, but Prof. Enkvist suggested that socioeconomic background does not have so great an impact on a child's success at school as their family life. She cited multiple studies in order to illustrate this. One conducted in Samson, a relatively poor area of Milwaukee, investigated the difference in academic success between children of similar backgrounds. For those children who passed their exams, the study showed that there was generally somebody in at 4pm when they came home from school, who would ask them ‘What did you do today?' and ‘Do you have homework for tomorrow?' This does not imply that the parents generally had a higher level of education, or that they were even capable of helping with the homework, but rather that they gave importance to school and showed their approval of it. On studying the intake for the Mehrbof programme in Baltimore, which runs a grant project for Afro-Americans who want to attend university and have good high school grades, the pattern was that the students' parents had often taken them to museums, libraries, and had bought them science kits (and the like) for Christmas. These, then, were active parents. If there was a problem with the school – their child was not learning, their friends were not helping them develop appropriately – they did not delay taking action, perhaps requiring the removal of their child from the school. She also cited figures showing that those children whose parents are receiving state benefits, at three years of age have a vocabulary of approximately 600 active words, whilst those whose parents are working-middle class, use 2,010 words. This was put down to the attitude of parents, who were more likely to talk to their children – to explain rather than to criticize them. The parents' approaches and relationships with their children in these cases, as Prof. Enkvist sought to demonstrate, are more important than the families' socioeconomic histories.

Prof. Enkvist wanted to point out that those proponents of a "free pedagogy" should not deny the existence of "anti-intellectual groups" in schools, which often come as a result of parental influence. She did, however, also stress the personal attitude of the pupil towards studying, agreeing with Rod Paige, the architect of G. W. Bush's ‘No Child Left Behind' programme and himself Afro-American, who proposed this as vital. And, on the part of the state and school, as Haberman shows, there is also a necessity of ensuring that prior to entering university, pupils have the opportunity to attend advanced classes, and acquire good study habits.

Prof. Enkvist concluded by drawing parallels with other racial groups in the U.S., highlighting the difference between the attitudes of immigrant Mexicans and Japanese, or Italians and Jews, who arrived in the first half of the twentieth century. The two latter groups (Japanese and Jewish), whilst starting out in the same kind of blue collar employment as their fellow migrants, managed to advance through the system to greater academic success than the Mexicans, Italians, or indeed Afro-Americans. Those who come directly from Africa, or from Jamaica, also do remarkably better than their American racial counterparts. Four things, according to Enkvist, make a difference in education: the student's effort to study, their family, the standard of the school, and the demands the state makes. But the attitude of the student and his or her family are of paramount importance. 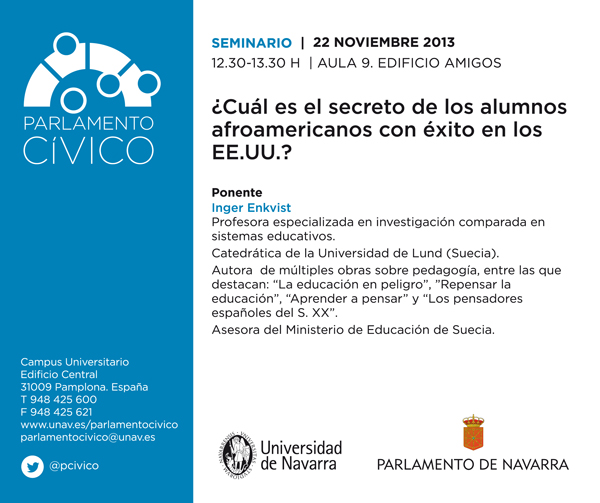