The School of Economics and Business Administration was established in 1987 with the goal of becoming a center of reference based on quality. With this goal in mind, Miguel Alfonso Martínez-Echevarría accepted the appointment as the first dean of the School. He was backed by his extensive experience and ample research work, but had never faced anything like the challenge of launching a School.

In 1993, Luis Ravina, who had been a teacher at the School since 1990, was named the new dean to continue the successful work carried out by Martínez-Echevarría. And the School continued to grow: it expanded its academic programs and began to organize the International Forum each year. The IESE Program was also launched.

New challenges were faced by Reyes Calderón following her appointment as dean between June 2008 and 2014: the implementation of the Bologna Process, the construction of a new, modern building and, most importantly, the bolstering of the School's quality in five strategic areas: its student-centered approach, research, teaching, international outlook, and employment prospects.

Ultimately, these thirty years of history of the School of Economics and Business Administration at the University of Navarra have been marked by dreams and projects, by the desire to achieve academic excellence, by engaging in high-quality, intensive research, by opening its doors to internationalization and, as our first Dean said, by "educating economists who have a human touch".

The School in figures 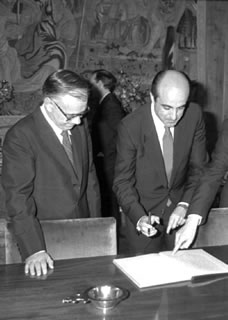