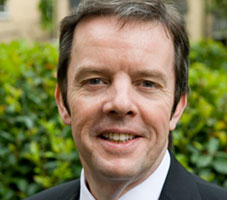 LECTURE
Establishing your Distinctiveness in a crowded HE marketplace

Alan Ferns is Assistant Vice-President for External Relations and Reputation at The University of Manchester, the United Kingdom’s largest and most popular university. He is responsible for providing co-ordination, leadership and strategic direction for a wide range of external relations and reputation building activities.

Prior to taking up his current role in January 2017, Alan was Director of Communications and Marketing at the University where he managed the award-winning central communications and marketing team.

Alan and his team delivered all of the communications surrounding the successful Manchester “merger” of 2004 and built the brand that has transformed the global reputation of The University of Manchester since then.

He has worked in the field of University communications since 1983 at the Universities of Lancaster, Salford and Manchester.