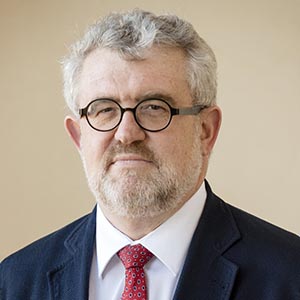 Miguel Falomir Faus (born in Valencia, 1966) has been the Director of the Prado Museum since 17 March 2017. He was previously the Museum’s Deputy Director of Conservation and Research, a post he had held since April 2015.

Miguel holds a PhD in Art History and is a Professor at the Universitat de València. From 1997 until he was appointed to his current role, Miguel led the Conservation Department at the Prado Museum.

During this period, he oversaw extremely significant advances in the study of the Prado’s collections of Italian Renaissance paintings. Evidence of these advances can be found in the major restorations that took place and the organization of a large number of temporary exhibitions, including The Renaissance Portrait, Late Raphael, The Furias: From Titian to Ribera, and shows dedicated to the work of Titian and Tintoretto.

Miguel achieved international recognition as a specialist in his field with his appointment as Andrew Mellon Professor at CASVA (the Center for Advanced Study in the Visual Arts, part of the National Gallery in Washington, D.C.), a post he held from 2008 to 2010.