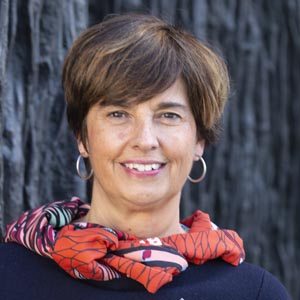 Marina obtained her undergraduate degree in 1984 from the Universidad Autónoma de Madrid’s Department of Prehistory and Archaeology, which forms part of the Geography and History Unit at the Faculty of Philosophy and the Arts.

In 1989 she became a qualified member of the National Council of Curators, and in 1990 began her public administration career as a Senior Museums Manager at the then Directorate of National Museums, which formed part of the Ministry of Culture. In 1996 she was appointed Deputy Director-General for the Promotion of Fine Arts at the Directorate General of Fine Arts and Cultural Assets, part of the Ministry of Education and Culture, where she was in charge of organizing national and international exhibitions.

In April 1999 Marina was appointed Director of the National Museum of Archaeology, where she implemented a series of measures that included an urgent action plan and a comprehensive renovation plan.

From June 2000 to January 2007 she was the Deputy Director-General of National Museums with responsibility for all of the areas that fall within the remit of the Directorate General.

Subsequently, from January 2007 to October 2014 she was the General Administrative Coordinator at the Prado Museum, and in November 2014 she began her current role as the Museum’s Deputy Director of Administration.

Throughout her career, Marina has also taught museum studies: from 1990 to 1996 she lectured at the Fundación Universitaria San Pablo CEU, and has contributed to several master’s degree programs in museum studies and related disciplines at a number of different public and private institutions. She has also directed and taken part in a variety of monographic programs and has written several publications on museum studies and cultural management.

Between 2013 and 2017 she was the President of the Spanish Association of Professional Museologists.