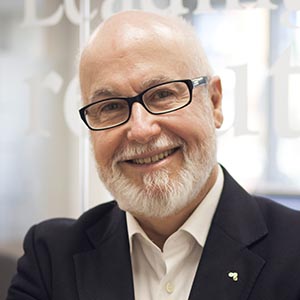 Ángel Alloza Losana holds a PhD in Communication Sciences from Universitat Jaume I in Castellón, a Master’s Degree in Trends and Innovation Processes in Communication, and a Degree in Psychology from the Universidad Complutense de Madrid. He also completed the Executive Development Programme at IESE Business School.

Ángel began his career as a researcher of qualitative and quantitative markets at Alef, before moving into strategic planning at J. Walter Thompson and progressing to Managing Partner at Millward Brown International in Spain and Portugal, where he worked until 1998. That same year, he joined the Strategic Analysis Unit at Argentaria, where he formed part of the General Directorate for the Office of the Presidency and Risk. In 2000, Ángel moved on to the Communication and Brand Department at BBVA, where he was responsible for a range of different functions, including branding, identity, reputation, metrics, and corporate advertising. Until February 2011, he was the BBVA Group’s Director of Communication Strategy, with overall responsibility for branding, reputation and metrics. He has been the Managing Director and Secretary-General of the Corporate Excellence-Centre for Reputation Leadership Foundation since April 2011.

He is the co-author of Atrapados por el consumo (“Trapped By Consumption”) and Reputación Corporativa (“Corporate Reputation”), he has written numerous articles for leading publications in the field, and has lectured at prestigious universities and business schools around the world. He is also an Honorary Professor at the Universidad de Málaga.