Incorporation to the catalogue

Individual bibliographic records on microfiche of the "Bibliotheca Palatina" collection, which was acquired several years ago, have been incorporated into the automated catalogue. In this way, it is possible to search by author and title the 11,303 volumes of the Bibliotheca Palatina, whose index up until now was only accessible in the printed catalogue of the collection, in the Reference Room (shelfmark Z 009946). 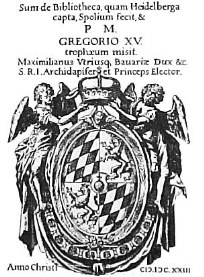 The Palatine Library at Heidelberg was, until the seventeenth century, the largest library in the North of the Alps, which is why it was called the "Mother of the German libraries". The Library was founded in 1438, when Heidelberg University received 155 manuscripts donated by Louis III, elector Prince of the Palatinate (1378-1436). Later, the manuscript and bibliographic collection increased, thanks to the work of Count Ottheinrich (1502-1559), a great lover of books, who established criteria to ensure the future growth of the Library and opened it to the public. Among the most significant acquisitions there is the private library of the famous banker Ulrich Fugger, who sold it to the University when he had to seek refuge in Heidelberg in 1567. In 1622, during the Thirty Years War, the Library, considered the most valuable treasure of literature in Europe, was seized by the troops of Maximilian I of Bavaria, who offered it to the Pope Gregory XV as war booty and sent it to Rome, where it has been ever since, forming the "Stampati Palatini" collection of the Vatican Library. From 1989 to 1995 the printed bibliographic records, excluding the manuscripts, were microfilmed by Saur publishers of Munich and published in more than 21,000 microfiche.

The Palatina Library covers the core of the scientific and literary production of Central and Northern Europe in the sixteenth century and the first decades of the seventeenth century. Among the areas of knowledge represented in the collection are Law, Medicine and Theology, where the works of Protestant authors published in Germany and France have a special place. Among the most valuable items is a scroll copy of the Bible, 48 lines long, printed at the Schöffer-Fust workshops in Mainz in 1462; Copernicus´Masterpiece De Revolutionibus, and some rare imprints in Slavic languages.

All microfiche have the shelfmark MF.mZ 000,030 and are classified in the Multimedia Room, where thay can be requested and played in the equipment installed in that room. In each bibliographic record, after the shelfmark, there is a letter and a number with which you can find the microfiche among the collection.

The catalogue is searchable by author or title of each work. By entering "Bibliotheca Palatina"  in the title field, you will get the complete listing of items, arranged alphabetically by title.