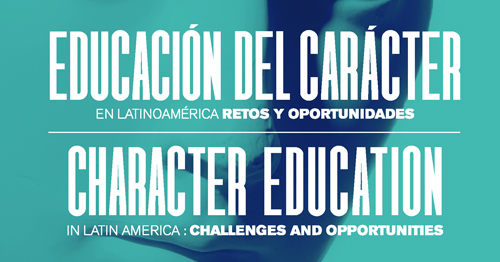 In the last three decades, the social sciences have shown a growing interest in personal and moral formation during childhood and adolescence with various proposals for its implementation. One of the most recent and promising approaches is what is called “character education.”

Although it is not the only way to approach the issue, it has an anthropological, psychological, philosophical and ethical basis that makes both its notion of character and promotion through education the object of reflection of the University of Navarra’s project on Researching and Promoting Character Education in Latin American Secondary Schools.

The conference is aimed at professors, researchers, policy makers, parents and, in general, all those interested in the field of moral and civic education.

The Templeton Prize for Character Education in Latin America will be awarded during the event. It seeks to recognize character education projects that are being carried out in schools, motivating teachers to be involved in them and raising awareness of their value through the dissemination of good practices.

On June 15, the Austral University will also hold its Academic Conference on Education.

School of Education and Psychology
Institute for Culture and Society