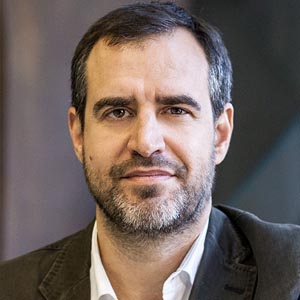 Pablo has a degree in Economics from the Universidad Autónoma de Madrid and a master’s degree in Cultural Management from the Universitat de Barcelona. He also completed a postgraduate program in Strategic Planning for Nonprofit Organizations at Harvard Kennedy School and a postgraduate program in Evaluating Social Impact at MIT’s Poverty Action Lab (J-PAL).

He began his career in the field of marketing consulting at the multinational corporation Millward Brown, where his role centred on the consumer goods, cultural and entertainment industries. In 2007 he joined the Corporate Business Development Unit at Telefónica, before moving to the Telefónica Foundation two years later.

It was there that his career began to develop in the area of education through the management of innovative projects with an educational focus and the coordination of the Foundation’s activities in Latin America and Europe. In November 2016 Pablo moved to the Digital Culture Unit, where he was in charge of coordinating cross-cutting projects and the activities of the Publications and Reports Department. Since January 2019 he has been the global manager of the Foundation’s Culture Unit and the Espacio Fundación Telefónica, which is responsible for coordinating the activities of the Foundation’s cultural centres in Madrid, Santiago de Chile, Buenos Aires, Lima and Quito.