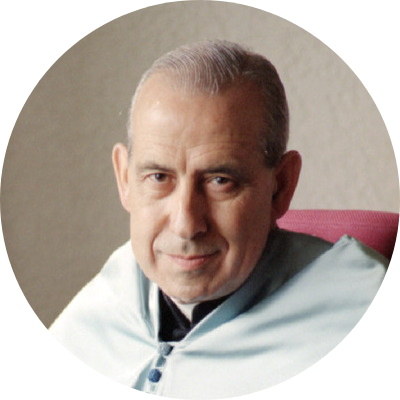 The Mariano Artigas Memorial Lecture (MAML) project is promoted by the Research Group Science, Reason and Faith (CRYF) at the University of Navarra (Spain). We can describe it both as a conference and as a prize.

Regarding the first point of view, the MAML mainly consists of a lecture dealing with one of the big questions on a field in which science, philosophy, and religion are interwoven. It is scheduled for the third Tuesday of October, according to a biennial periodicity, initiating October the 18th, 2011. It will take place in one of the main halls of the University of Navarra.

For the first edition, we count on the presence of Prof. William R. Shea (Galileo Professor of History of Science, University of Padua), who will lecture on “The Galileo affair. What Theology may learn from scientists”.

Through these biannual lectures, the project aims to honor the figure of the late Prof. Mariano Artigas (1938-2006).

Prof. Artigas was a prominent scholar in the field of philosophy of science and a pioneer of the dialogue of science, philosophy, and theology in the academic world. His numerous publications involve different topics, such as the nature and causes of evolution, the relation between science and truth, the relation between science and religion, and the history of science. Some of his works have been translated into several languages and have influenced both the English-speaking and the Spanish-speaking worlds.

Likewise, Prof. Artigas handed down an intellectual legacy that the MAML tries to honor and to pass on. The memorial lecture will permit a better knowledge of Mariano Artigas’s work on the part of the invited lecturers as well as of the participants. It will also raise the academic world’s awareness on the importance of an interdisciplinary approach to the big questions that Artigas dealt with.

The MAML also tries to give recognition for the work carried out by the invited speaker. The members and collaborators of the CRYF will elect the person in charge of the MAML one year and a half before the date of the lecture. The speaker will be selected from amongst worldwide scholars whose research fields involve questions related to the main CRYF’s interests, namely: