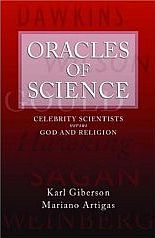 Some scientists are out of their depth when they wade into philosophy and theology.

Books by scientists who pontificate about religion are rather like gala dinners in which film stars endorse politicians. There's glamour and drama and photographers and TV crews. But afterwards, the question remains: just why are George Clooney's opinions more valuable than my barber's? And after reading Oracles of Science, this is precisely the question to be posed to fans of celebrity scientists.

It is only natural that scientists are the darlings of the media, especially when global warming and climate change are terrifying readers. After all, scientists' opinions have been peer-reviewed by colleagues in a rigorous system for sifting good ideas from bad. But when they turn to larger questions about the origins of the universe and about religion, the peer-review system breaks down. The closest thing to it might be a softball interview on National Public Radio.

The authors of this extremely valuable book, the late Mariano Artigas, a Spanish priest who had doctorates in physics and theology, and Karl Giberson, an American physicist, point out that many widely held notions about the relationship between science and religion are mistaken. Most scientists, it is commonly thought, are agnostics or atheists. Yet about 40 per cent of American scientists believe in a God who answers prayers. Take Francis Collins, leader of the Human Genome Project, and a devout Christian. He recently published a book entitled The Language of God: A Scientist Presents Evidence for Belief. The notion that science and religion are incompatible is belied by the legion of believers who work in laboratories and lecture rooms. Even Galileo was a believer, whose faith-filled riposte to his judges was "The intention of the Holy Spirit is to teach us how to go to heaven, not how the heavens go".

However, Oracles of Science was not written to show how popular religion is amongst scientists, but how little rigour the arguments for atheism of six "celebrity scientists" share with their scientific work. It profiles Richard Dawkins, Stephen Jay Gould, Stephen Hawking, Carl Sagan, Steven Weinberg and Edward O. Wilson. A chapter is devoted to each of them, with a brief personal profile, an assessment of his scientific reputation and a dissection of his views on religion and the existence of God. The tone is polite, scholarly and full of admiration for undeniable professional and personal achievements: in short, an exemplary handbook for all those who wish to be informed without emptying the shelves of their local bookshop.

This is not a book of polemics, but a fair-minded, well-informed critique. And its tone is certainly more gracious than Oxford's Dean of Atheism, Richard Dawkins, whose fundamentalist hostility borders on fanaticism. Faith, he says, "is one of the world's great evils, comparable to the smallpox virus but harder to eradicate". The other "oracles" are more accommodating, even if they do deny the existence of God. The late Stephen Gould, for instance, in his book Rock of Ages, suggested that religion and science are "non-overlapping magisteria", one of which deals with the natural world and the other with spiritual and ethical questions. This represents more kindly condescension than respect, but at least it was possible for believers to dialogue with him. Wilson, who was a devout Southern Baptist as a youth, is actively trying to bridge the gap between science and religion -- by converting believers to a new religion, "consilience", a celebration of the rich tapestry of life.

Reading any of these scientists' books can be an intimidating experience, as they deploy an astonishing breadth of knowledge about the natural world along with skillful rhetoric. They are all brilliant communicators and write with magisterial self-assurance. Yet their positions on fundamental issues, both scientific and philosophical, are far from unanimous. Wilson, for instance, was attacked by Gould for promoting racism and genetic determinism. Gould championed punctuated evolution, and Dawkins graduated evolution.

More significantly, they have very different ideas about what the truth of the universe is. Gould, who was influenced by Marxist materialism, is an "old-fashioned" realist who believes that there is a world "out there". Wilson muddles logical positivism and thorough-going materialist realism. Dawkins prides himself on accepting only testable, quantifiable, empirical evidence and then solves the all conundrums of human culture by asserting the existence of "memes" for which there is no evidence whatsoever. They may be singing the same tune, but the lyrics are wildly different, even contradictory.

Artigas and Giberson are not foes of science. They simply want scientists to "treat the humanistic issues that lie beyond the boundaries of science with the same rigour they employ when dealing with scientific problems." Were that ever to happen, there would be an immediate armistice. Intelligent as these scientists are, their understanding of the philosophical issues involved is weak. In many instances, all they do is dust off illogical arguments repeated over hundred, if not thousands of years. Their explanations might be crackerjack material in Philosophy 101, but as serious academic contributions, they hardly pass muster. The fatal flaw is the hubris of scientism, the conviction that the single spyglass of science can encompass all of reality. How about joy, or justice, or order, or truth? The very claim that science can explain absolutely everything cannot be supported by the scientific method.

The victim of the recent crusade by a few scientists to discredit religion, Artigas and Giberson suggest, could ultimately be the prestige of science itself. "As history has shown, science is all too frequently enlisted in the service of propaganda; and... we must be on guard against intellectual nonsense masquerading as science." Their book is an excellent guide to winnowing the sense from the nonsense.