Lt. Gen Laura J. Richardson, the third female recently nominated to lead a US combatant command, with a mission to consolidate military cooperation with Latin America in a moment of growing regional political uncertainty

On October 29th, 2021, US Army Lieutenant General Laura J. Richardson is scheduled to assume duties as commander of US Southern Command (USSOUTHCOM) from US Navy Admiral Craig S. Faller. Richardson will be USSOUTHCOM’s 25th commander, and first female commander. She will also be the third female commander of all 11 combatant commands, the first being US Air Force General Lori Robinson of USNORTHCOM, appointed in May of 2016. During the years of the Trump presidency, no new female combatant commanders were appointed. Now, in addition to Richardson, President Biden has also nominated US Air Force General Jaqueline Van Ovost to lead USTRANSCOM.

The recent nominations of these three female commanders falls in line with US government efforts to promote female military participation. In 2017, the US Congress passed the “Women, Peace, and Security Act,” from which the Department of Defense developed key strategy objectives in 2020. Objective number one aimed to “seek and support the preparation and meaningful participation of women around the world in decision-making processes related to conflict and crisis.” Richardson’s appointment furthers this objective.

USSOUTHCOM’s commander, in addition to heading the combatant command’s operations, carries out multiple diplomatic visits internationally, behaving in this way much like a head of state might, but only in the Latin American region. In 2021, Commander Faller made five separate diplomatic trips, visiting a total of seven countries: Uruguay, Argentina, Dominican Republic, Guatemala, Trinidad and Tobago, and Barbados.

In her August 3rd nomination hearing, Richardson echoed many of the same sentiments expressed by outgoing USSOUTHCOM commander Craig S. Faller in USSOUTHCOM’s 2021 Posture Statement. Richardson decried “the predatory actions of China” and “the malign influence of Russia” in the region, continuing Faller’s rhetoric about the geopolitical dangers of predatory lending by External State Actors (ESA’s) such as China, Russia, and Iran in Latin America.

Faller, perhaps because his military career is ending this year in retirement, whereas Richardson was speaking at her nomination hearing, has been much more explicitly critical of low federal funding for USSOUTHCOM. For example, during a House Appropriations Committee hearing in April 2021, Admiral Faller requested an increased intelligence, surveillance, and reconnaissance (ISR) budget for USSOUTHCOM for FY 2022. Sources place this request around $40-50 million USD. Whether USSOUTHCOM will be granted a larger budget under Commander Richardson will be crucial to its future effectiveness in the Latin American region.

History of the US Southern Command

The origins of the United States Southern Command, USSOUTHCOM, can be traced back to the creation of the independent Republic of Panama in 1903. The completion of the Panama Canal in 1914 skyrocketed the geopolitical importance of Central America in the eyes of the US, converting the Caribbean Basin particularly into a kind of “third border,” and drastically increasing US military presence in the area (Nicaragua 1909-1933, Honduras 1912, Haiti 1915-1934, and the Dominican Republic 1916-1924). It was of these US Marine landings and military occupations, in addition to the continued US military presence in Panama, that USSOUTHCOM was born. Established during World War II in 1947 under the name “US Caribbean Defense Command,” the Command focused on defending the Panama Canal, in addition to promoting regional security cooperation in the Americas.

During the ‘60s, USSOUTHCOM continued to defend the Panama Canal, and also led Cold War contingency planning (especially in the context of the Cuban Revolution), and administered US foreign military assistance programs in Central and South America.

In the context of the Antiwar Movement, USSOUTHCOM’s activity was greatly reduced during the ‘70s, and USSOUTHCOM itself was nearly eliminated entirely.

In the ‘80s, the Salvadoran Civil War and the Nicaraguan Revolution prompted the US government, under the direction of President Ronald Reagan, to revitalize USSOUTHCOM and its presence in Central America especially.

During the period of dramatic change brought about in the US military by the end of the Cold War in 1991, the Caribbean Basin was returned to the AOR of USSOUTHCOM, and USSOUTHCOM began to focus primarily on counter-drug operations, as well as secondarily on humanitarian operations, a trend which continues to the present day.

In 1997, USSOUTHCOM’s headquarters were transferred from Panama to Miami, FL, where they remain to the present day.

In 2008, the US Fourth Fleet (USFOURTHFLT) was reestablished after 58 years of retirement since its WWII-era creation and Caribbean operations. USFOURTHFLT belongs to the Navy branch of USSOUTHCOM (USNAVSO), but does not count with its own ships. Instead, when it needs ships for operations, it must borrow them from other units of the US military. However, this technical difficulty has not prevented USFOURTHFLT from being instrumental to USSOUTHCOM in responding to natural disasters and fighting the War on Drugs in the Caribbean Sea.

Despite the reestablishment of the US Fourth Fleet in response to growing Ruso-Venezuelan cooperation under Hugo Chavez, (and the other “Bolivarian” governments of ALBA’s critical attitude towards Washington), USSOUTHCOM’s relationship with the countries of Latin America has remained relatively stable. Many Latin American countries such as Colombia, Brazil, Honduras, and the Dominican Republic participate frequently in military joint exercises in the region, and the US has continued to express its commitment to humanitarian aid in the region via the “Band Aids not Bullets” diplomacy of the USNS Comfort Hospital ship.

USSOUTHCOM’s 2021 Posture Statement reported: “Since April 2020, USSOUTHCOM has executed over 485 [of humanitarian assistance] projects in 28 countries [in Latin America], with a total investment of more than $56M, in addition to the humanitarian assistance delivered by State and USAID. Our efforts range from deploying field hospitals to providing critical PPE.”

Prior to August 14th, Colombia and Honduras dominated USSOUTHCOM activities in the region, with 14 each. In Colombia, the majority of these were military trainings, whereas only four and three activities were dedicated to diplomacy and humanitarian aid, respectively. In Honduras, however, half of USSOUTHCOM activities were humanitarian aid, and 3/7 were military trainings. Both of USSOUTHCOM’s firefighter trainings in 2021 (CENTAM SMOKE) were held in Honduras, and only one published activity was diplomatic in nature.

In total, $1.3 billion USD in cocaine has been seized by USSOUTHCOM in 2021 thus far, with at least one seizure reported per month, with the exception of August, when USSOUTHCOM naval resources were concentrated on responding to the earthquakes in Haiti. The three biggest drug seizures occurred in February, which were worth approximately $200 million USD each.

As of April 1st of last year, USSOUTHCOM increased its counter-narcotics presence in the Western Hemisphere, as well as its regional cooperation with other American nations towards this goal. USSOUTHCOM reported on May 21st, 2021 (just over a year after the policy shift): “Since then, our key partners have been involved in over 60% of drug disruptions since April 2020 (up from 50% in 2019). By strengthening partnerships, we counter threats together.” The 2021 drug seizure statistics show that this increased effort and regional cooperation appears to be working. 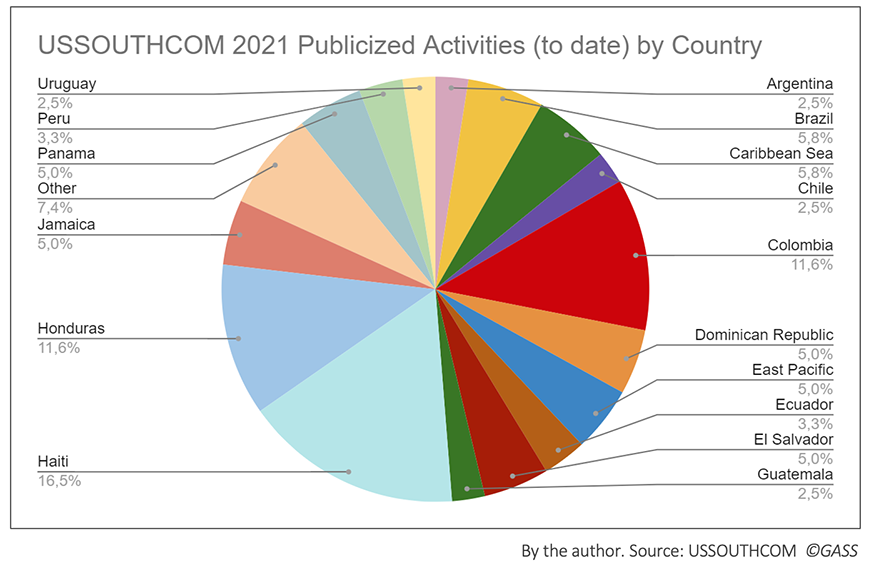 USSOUTHCOM’s other significant military training exercises are SIFOREX, PASSEX, Tradewinds, Exercise Relampago, and Resolute Sentinel. SIFOREX, or Silent Forces Exercise, is a Peruvian-hosted exercise and was also held in Lima from September 19-24, just before UNITAS LXII.

SIFOREX focuses primarily on anti-submarine warfare (ASW) in the context of China’s rising naval power. Colombia and Mexico contributed ships and submarines to the exercise, and Ecuador sent military observers.

PASSEX is a more spontaneous bi/tri-lateral naval passing exercise, held many times annually with various nations, which consists of “advanced close proximity maneuvering exercises designed to improve interoperability and advance the partner nation’s ability to communicate, navigate and operate together at sea.” Thus far in 2021, three PASSEX exercises have been reported, with Colombia, El Salvador and Guatemala, and the Dominican Republic.

Tradewinds 2021 was held June 13-25 by Guyana, which focused on multi-dimensional security in the Caribbean region. The exercise dates back to the 1980’s, and in addition to Guyana, 6 Caribbean nations attended: the Bahamas, Belize, Bermuda, Dominican Republic, Jamaica, and Trinidad and Tobago. Three colonial regional powers also participated: the Netherlands, France, and the United Kingdom, as well as Brazil and Canada. The US sent over 1,500 personnel.

Exercise Relampago is a bilateral, month-long annual exercise, running six years strong, between the US and Colombian Air Forces, under the framework of NATO.

The last major exercise, Resolute Sentinel (RS-21) differs from these other military exercises in that its primary objective is medical readiness as opposed to security. This year, the exercise was held in May and delivered medical care to over 2,400 Salvadorans. In previous years, RS has delivered medical care to Hondurans and Guatemalans, focusing its attention always on the three Northern Triangle countries.

Despite USSOUTHCOM’s significant activeness in the War on Drugs, natural disaster relief, and international diplomacy in Latin America, the combatant command receives little federal funding and even less press coverage. USSOUTHCOM currently counts 1,201 personnel and an annual budget of roughly $200 million USD for FY 2021. This figure is 37% of the annual USDOD budget for all 11 combatant commands of $540 million USD. To put these figures in perspective, the FY 2021 USDOD total budget is $703.7 billion USD, which means that USSOUTHCOM’s budget is approximately 0.00028% of the total DOD budget for FY 2021.

USSOUTHCOM’s own web page and socials are the only sources of regular updated reporting on USSOUTHCOM activity, and USSOUTHCOM’s YouTube channel counts with a miniscule following of 877 subscribers. USSOUTHCOM’s other socials fare slightly better, with their Instagram at 23,200 followers, 79,805 for Facebook, and 237,400 for Twitter. Regardless, USSOUTHCOM’s relative lack of budget, press coverage, and social media engagement suggest that Latin America as a region is perhaps not as much of a geopolitical priority for the US currently as it was at other times, such as during the height of the Cold War.