‘In the sea, we triumph’. Indonesia's strategy to counterbalance the US and China in the Southeast Asia

Strategic Analysis Report on Indonesia, May 2022 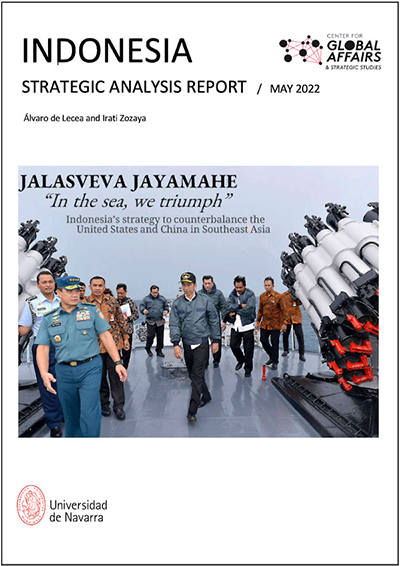 The purpose of this report has been to analyze the strategy Indonesia is following in order to counterbalance the United States and China in Southeast Asia and how it will evolve in the near future.

The rivalry between these two powers is most likely to stay the same, with China benefiting from regional states’ economic dependency and the US establishing more military and security ties with them. The former one will probably follow the thread it actually has, being more assertive in its policies. And even if the US keeps pressuring the region with the rest of the QUAD members, it will not lead to a radical increase in their influence in the region.

At the same time, despite the similarity between the Ukrainian conflict with Russia and Beijing’s attitude towards Taipei, it is not expected that China starts a war in the short or middle terms. In case the conflict escalates, while the US will most probably support Taiwan militarily and economically, the regional states will fear their economic dependency on China too much to take any action against it.

In this sense, we have provided four different scenarios driven by a series of changes among the relevant actors in the dynamics of the region. We have concluded that the one with the highest probability of happening is the continuance of the status quo, as any other path would be too radical and the expected changes are not as extreme. Nevertheless, the next most probable outcome would be the one where China becomes the hegemonic power in the region, followed by ASEAN being able to reach a high powerful position where it can counterbalance the US and China, and leaving the imposition of the FOIP by the US as the last possibility.

Furthermore, ASEAN will try to maintain the status quo of the region by balancing its interests with the limited agreements it holds with China and the United States. It will keep balancing the relationship with both powers in order to avoid any of those from controlling the region. Within the organization, Indonesia will continue to be the unique primus inter pares and maintain its unofficial leadership, in spite of the fact that it is currently more focused on reforming its domestic policies.

As Joko Widodo will be substituted in the next elections of 2024, there is no guarantee that the administration replacing him will keep on with his Global Maritime Fulcrum Strategy. Nevertheless, any possible strategy will be very similar to the current one, since it is in line with the Vision 2045 of Indonesia. Indeed, they have been following a similar thread for over ten years, so changing it now would be very incoherent.

Even if his administration has tried to tackle the issue regarding the lack of national cohesion, the prospects for this are not really optimistic. The situation will even slightly worsen in the near future. Moreover, some of the domestic policies the government is currently working on have a social focus, aiming to decrease Islamic fundamentalism and terrorist threats.

The reforms that Jokowi is launching in order to end corruption, which as is slowly progressing, will not see extraordinary changes in the near future. Climate change proposals will probably increase as soon as the country is able to invest more in renewable energy and take full advantage of its natural resources.

Additionally, the country’s economy is expected to keep growing, since it is heavily investing in infrastructure, which will foster foreign investment. This last aspect will also be furthered through the RCEP, which will also mean a lowering of trade barriers. Moreover, Indonesia is optimistic about the Chinese BRI, since even if it needs its inversion, Indonesia is fully aware that it cannot completely depend on China. Thus, it will avoid that possible outcome.

Regarding the country’s external policy, ASEAN’s centrality will maintain the primary focus. Even though its presence will decrease, Indonesia will always be present in the organization’s dynamics by exercising influence and putting pressure in favor of its proposed arrangements. Indeed, chairing ASEAN in 2023 will demonstrate to the other member states that Indonesia still has a say in the organization.

Finally, Indonesia becoming a middle power in the region is quite unlikely. Nevertheless, we have offered a scenario in which we analyze the possible consequences this situation would have domestically and internationally. In general, although relevant, they would not suppose any major changes.