Russia became an important arms supplier for Latin America, but its sales have dropped

The region purchased only 0.8% of total Russian arm exports in 2015-2019; the US has recovered its position as the main arms supplier for the Americas

▲ A Russian Sukhoi Su-30MK2 bought by Venezuela, in Barquisimeto in 2016 [Carlos E. Pérez]

Over the last two decades Latin America increased its military expenditure. As the Latin American countries improved their economies, they looked to modernize their military and defense systems. The purchasing spree was notorious during the golden decade of high commodity prices (2004-2014), specially during the first five years, which were the more profitable in public income terms. After the commodity boom was over the region lowered its military purchases.

The trend was not uniform. Meanwhile Central America and the Caribbean, less affected by the commodity cycle, kept increasing the expenditure in arms imports over the last years, South America, more depending on minerals and oil exports, reduced the volume of arms transfers. Taken the region as a whole, Latin America's military purchases were 10% of global arms transfers in 2010-2014, and 5.7% in 2015-2019, according to SIPRI. Between the two periods, arms imports by Latin America dropped 40%.

This general evolution was mirrored by the ups and down of Russia's portfolio in the region. Moscow managed to exploit the opportunity of the golden decade to the fullest. Russia positioned itself as a willing partner in arms sales and became the leading arms exporter in the region, surpassing China and the United States by far. Russia tried to exert its influence in Latin America to the highest extent possible, taking advantage of a wave of leftist governments (the so-called pink revolutions). Latin America has traditionally fallen under the sphere of influence of the United States. With Russian arms sales in the region, it serves as a direct challenge to US influence. As the second largest exporter of military arms in the world, after the US, Russia has a unique opportunity to affect policy in the region.

However, it is important to note that from 2014 onwards, Latin American arms imports have really begun to drop off, and this includes Russian exports as well. Russian arms exports decreased by 18% globally between 2010-2014 and 2015-2019, first affected by a prominent drop of purchases by India (-47%), which is its main client (25% of Russia's sales in that period), and, less importantly, by a reduction of imports from the Americas. Russian sells to Latin American countries were only 0.8% of total Russian military exports. From 2014 onwards the US recovered its traditional position as the main arms supplier for the region. 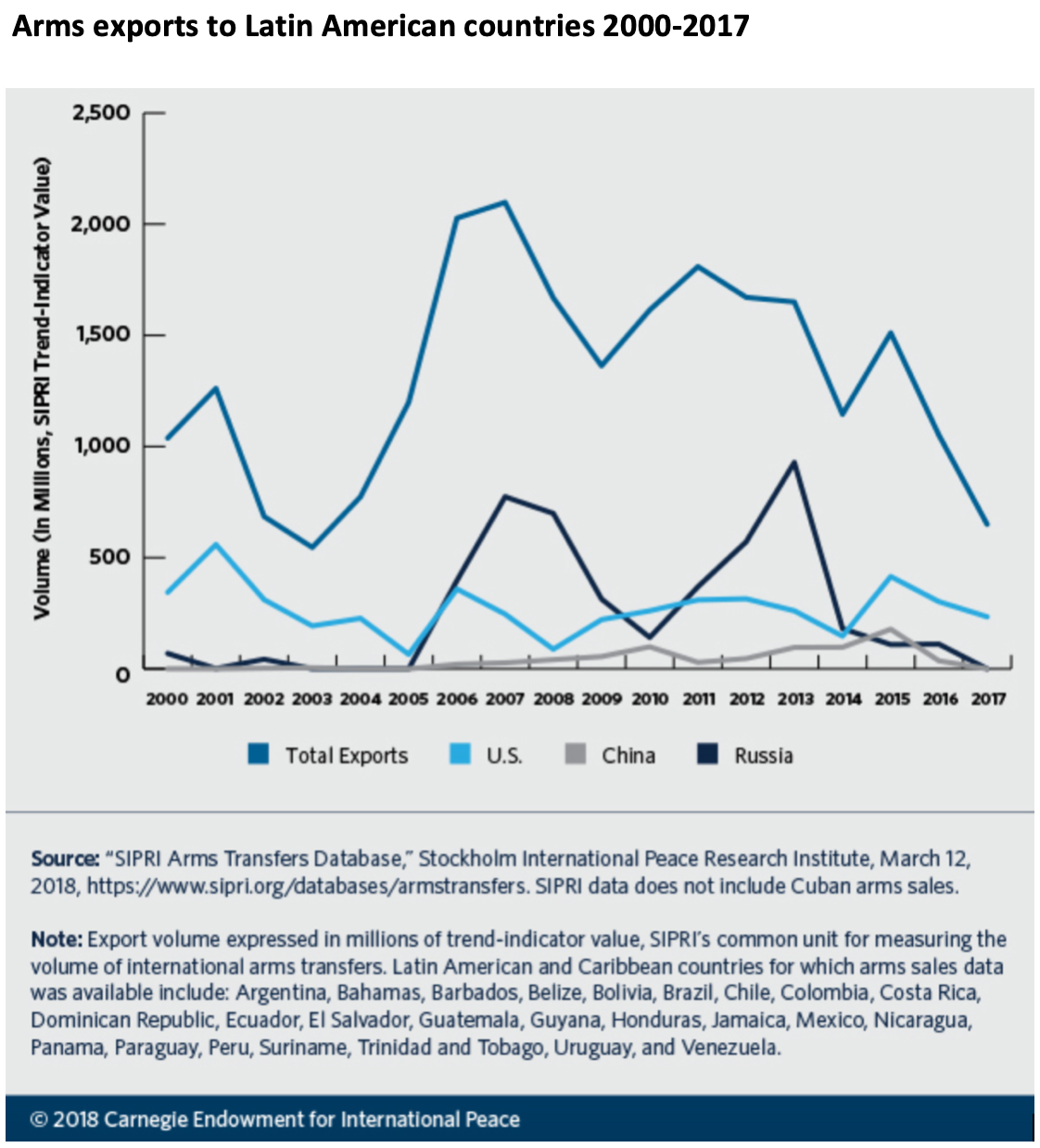 In the last two decades Venezuela has been Russia's biggest customer in the Western Hemisphere. Since the mid 2000’s, after Hugo Chávez consolidated his power, Venezuela has purchased almost $20 billion in military equipment from Moscow. The years 2005 and 2006 saw the beginning of the transactions: Russian loans for Chavez's government to buy arms in exchange of future Venezuelan oil deliveries.

Over the years Caracas carried out more than thirty operations of arms acquisitions. more than the number of operations done by the other countries combined: Mexico 7, Peru 6, Nicaragua 5, Brazil 4, Colombia 3, Ecuador 2, and Argentina, Uruguay and Cuba 1 each. Among other significant material Venezuela acquired 24 Sukhoi fighters Su-30MK2s (and ordered 12 more), the S-300 surface-to-air missile system, various combat and transport helicopters such as the Mi-35M and Mi-26 models, and 92 T-72M1 tanks.

The prospects of Russia getting all its money back any time soon from Venezuela is quite low. Due to the severe economic conditions of the country, Venezuela has not been able to continue its payments, so the terms of the debt had to be renegotiated. Since 2014 Moscow has not delivered any new material. After the withdraw of the giant Russian energy company Rosneft from the country at the beginning of 2020 there have been less ways for the Russians to recover the loans. In many respects, this has left Venezuelan-Russian relations at a crossroads.

As Venezuela continues to decline rapidly, Russia is faced with deciding whether to keep making large investments in a country where it is tremendously risky or just abandon all efforts which have been made over the past few decades. Only time will tell which course of action the Kremlin will take.

Besides Venezuela there are a handful of other nations which have also carried out arms deals with Moscow. Nicaragua for example has been the beneficiary of many arms deals. According to the SIPRI Arms Transfers Database, in the first decade of the 21st century almost no arms orders had been made. However, this changed two years after Daniel Ortega came to power in 2007. Since then 90% of all military imports that Nicaragua has received have been supplied by Russia. In 2016, 50 T-72B1 Russian tanks were shipped to Nicaragua as part of a reported $80 million deal. Then in 2017 two Antonov An-26 military transport aircraft were sent.

The Nicaraguan government justified these purchases, saying that the equipment would be used as part of the struggle against drug trafficking. However, this has caused many other Latin American nations to become concerned of a military imbalance in the region, especially because some of the new equipment is more proper for waging war rather than keeping internal security.

Reports on Nicaraguan-Russian relations point to the fact that Russia may have ulterior motives beyond just influence. In many ways it comes down to military real estate. The arms deals between the two countries has been seen as an attempt on the part of Russia to curry favor with the Nicaraguan government in attempts to gain access refuelling facilities by the equator.

Other significant Russian arms sales recipients, as already mentioned, include states such as Peru, Mexico and Brazil. In the case of Peru, a country that even during the Cold War had some Soviet weapons systems in its inventory in order to diversify its arm imports, the most recent deal occurred between 2014 and 2016 valued at approximately half a billion dollars: the purchase of 24 transport helicopters Mi-8MT and Mi-17 (another 24 units were ordered in 2017).

Mexico has not Russians among its main arms suppliers (64% of Mexican purchases were to the US in the period 2015-2019; 9,5% to Spain and 8,5% to France), but still it carried out six arms deals with Russia since 2000. There has not been a deal made since 2011 when three Mil Mi-17 Military helicopters were purchased.

Brazil has also had a handful of deals with Russia in recent years, during the presidencies of Lula da Silva and Dilma Rousseff, when a amore pro-Russia stance was held by the government. This has changed immensely since the election of Jair Bolsonaro in 2018. The Brazilian government is now openly concerned for Russian influence in the region and has begun to take a more pro-USA stance when it comes to foreign policy. In any case, in the period 2015-2019 the main arms suppliers to Brazil were France (26%), the US (20%) and the UK (17%).

This drop can be attributed to two main factors. In the first place, the change of ideological orientation in the Latin American countries, with less leftist parties in power. Secondly, the end of a booming economy in the region. And additional reason could be the international sanctions against some specific Russian industries due to the aggressive foreign policy conducted by Putin.