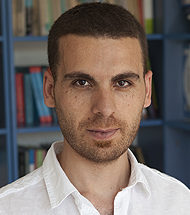 Zafer Kiyan obtained P.h.D. Degree from Ankara University in 2015. He is currently working at the Faculty of Communication of Ankara University. He gives lectures on aesthetics and media industries. His research interests are mainly focused on political economy of media, new communication technologies and cultural industries. Kiyan is the author of “GATS and the Restructuring of Telecommunication in Turkey” (2011), “Mobile Democracy Discourse in a Turkish Experiment” (2012), “Traces of Digital Capitalism in Communication Field: Processes of Production, Circulation, Labor and Consumption” (2015) amongst others.

His research project, entitled as “A Critical Analysis of the Cultural Production in Digital Industries: Two-Step Production of Culture as Commodity”, focuses on the digital production and commodification of culture. Contrary to the common approach in the literature that takes the commodity nature of cultural products for granted without investigating production phase in which commodification actually happens, the research put an emphasis on the production and circulation of cultural commodities in order to better understand the issue. The model provided, the two-step production model, is intended to be the major contribution of the project.