Kristján Kristjánsson, professor at the University of Birmingham, offered a philosophical and psychological view of character education in the framework of an international conference 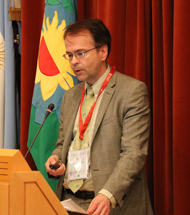 An Aristotelian view of character education that centers on the thinking of the Greek philosopher and that takes social-scientific findings based on an ethical naturalism into account. This is how Kristján Kristjánsson frames character education, as does the institution of which he is deputy director, the Jubilee Center for Character and Virtues at the University of Birmingham (United Kingdom).

He gave these remarks at the Character Education in Latin America: Challenges and Opportunities conference organized by the University of Navarra in collaboration with Austral University (Argentina) and funded by the Templeton World Charity Foundation.

He specifically advocates for an Aristotelian proposal because it is "better grounded in a viable moral theory and a richer conceptual repertoire (praxis, naturalism, phronesis...)" He also argued that this conception of character education, unlike others, avoids instrumentalism.

In an exercise of reflection, throughout his talk he delved into a series of unsolved problems that affect character education in general, including the Aristotelian view of it.

First, he considered the need to connect with psychologists and get them involved in this proposal, helping them understand the distinction between facts and values ​​and the idea of ​​intrinsic value.

Secondly, he referred to the problem of the heterogeneity of character education terminology, both geographical and historical, which makes it difficult to implement classroom programs, including those with an Aristotelian perspective.

Third, he mentioned innate factors, like the idea that the development of virtues must conform to personality. Fourth, he pointed out the variation of moral roles— and, therefore, of aspirations and obligations— that arise according to a person’s role (father, student, friend, client, etc.).

Fifth, he pointed out the problem of habitus, i.e., the different social, ethnic and educational self-conceptions that children bring to school. "Most empirical research into moral development or pro-social attitudes –almost no matter how measured– reveals a strong link to socio-economic-cum-social-capital background. Kids with educated and relatively well off parents score better than poor kids. Perhaps this is not surprising. What is surprising, however, is how few programmes of moral education attack this issue head-on," he lamented.

Thus, he advocates for paying attention to the ways in which the different habitus that children take to school “can be turned into a moral resource rather than continuing as a source of potential disadvantage.”

The sixth problem he sees is the “rational tail” wagged by the “emotional dog,” which the social psychologist Jonathan Haidt describes. "Character education does not account for the latest research findings from what he calls ‘the new synthesis in moral psychology’, involving a mixture of hard sentimentalism about morality -on emotion as the sole donor of moral value- and social intuitionism about moral motivation as innate, emotion-driven, modular and automatic, with a significantly reduced role for reason."

He question how educators with an Aristotelian view of character can respond to these findings and if "emotionalisation of morality has gone too far."

The seventh problem involves self-knowledge and the resistance to change. "Aristotelian character educationists tend to overestimate both people’s ability to understand who they really are deep down and their motivation to change even if they realise that their current character traits leave something to be desired."

Finally, he alluded to the need for a moral theory that unifies instead of continually engineering fragmented pieces. "We need from time to time to step outside of Plato’s cave and view its insides from the vantage point of the external observer who asks the penetrating question of what all this talk about character education is then really for."

In conclusion, he encouraged specialists in moral education in general, and in Aristotelian character education in particular, to think about these issues. He encouraged them to take a "substantive dose of intellectual modesty” to mitigate “the transformative aims of current efforts."

Kristján Kristjánsson participated in an international conference on Character Education in Latin America: Challenges and Opportunities, which brought together researchers, teachers and educational policy makers. It took place on June 13 and 14, 2018 at Austral University’s IAE Business School in Pilar (Argentina).

The conference was organized by Researching and promoting character education in Latin American secondary schools, a joint research project of the School of Education and Psychology and the Institute for Culture and Society (ICS). It received funding from the Templeton World Charity Foundation.