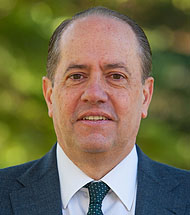 Pope Francisco has appointed Professor Jokin de Irala as an ordinary member of the Pontifical Academy for Life, of which he was already a corresponding member. Dr. de Irala is Professor of Preventive Medicine and Public Health in the School of Medicine and a researcher at the Institute for Culture and Society (ICS), both of the University of Navarra.

Saint John Paul II founded the Pontifical Academy for Life in 1994. It aims to promote the study of themes that touch on bioethics and law and relate to the promotion and defense of life.

Professor de Irala expressed his great joy at this appointment and his desire to continue collaborating from his area of ​​knowledge: "I will put at the service of the Academy my 25-year experience as a researcher and university professor, where I have worked for many years to transmit and give answers to profound questions related to love, sexuality and human life.”

He has served as an evaluator of projects, participating actively in research groups financed by public and private entities. His scientific contributions include presentations and communications at national and international conferences, the publication of 12 books, 58 book chapters and 156 articles in academic journals.

He is coordinator and principal investigator of the multidisciplinary project Education of Human Affectivity and Sexuality within the Institute for Culture and Society (ICS) at the University of Navarra.

He has given numerous lectures in a variety of countries. He is also the author of popular books such as “El valor de la espera” (The value of waiting), “Nuestros hijos quieren querer. Pautas para una educación afectivo-sexual” (Our children want love: Suggestions for affective-sexual education), and “Nuestros hijos quieren saber: 60 preguntas sobre sexualidad” (Our children want to learn: 60 questions about sexuality). He is married and has 5 children.